As mentioned in my intro, part of our purpose during this roadtrip is to see how others are striving to live more sustainably. So we’ve signed up with WWOOF – Willing Workers On Organic Farms – as a means of gaining some knowledge and experience in this area.

When we lined up a week with Sue and Don on their property near Daylesford, we were expecting to learn the practicalities of building with straw bales and living off-grid, but what we experienced was so much richer – it was as much about spending time with our hosts and getting to know them as anything else. And our hosts turned out to be incredibly interesting, caring and spiritually-minded people. I feel like we struck gold. 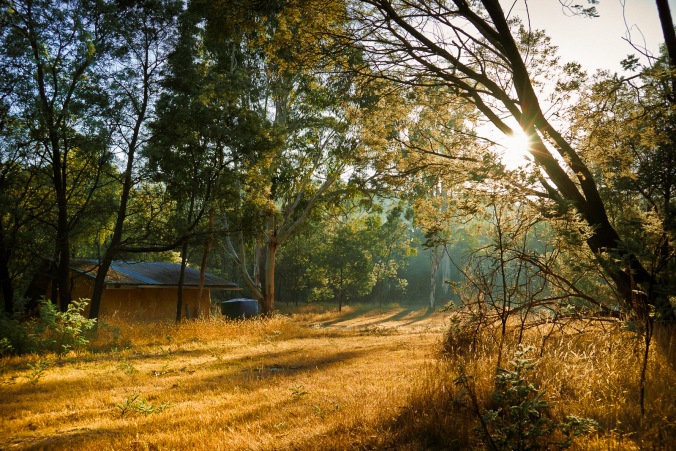 On the beautiful property of Sue and Don’s, known as Dja Willam

Sue and Don have been living on their 40 acre property, Dja Willam, for 17 years. If you’re a country girl at heart, like me, it’s a little slice of heaven. Towering gums, abundant bird life, native animals, pristine creek encircling part of the property and playing home to platypi, all contribute to a pretty peaceful and special place.

When it came to naming their property, Sue and Don wanted to chose a name that respected the traditional custodians of the land. Through the local cultural officer, they approached the Aboriginal elders with their request. After numerous visits (the elders had never had a white person request this before) the elders finally told Sue and Don that they need to sit and listen to the land and ask it what it’s saying to them; what it wants to be called. Don and Sue came back with the same sense they had before: that it’s to be a safe place; a place where people can come and be nurtured. An expert in the Dja Dja Wurrung language said the closest to this meaning he could find was Dja Willam, which means “earth nest”. I think this beautifully encapsulates who they are as well as their place.

Sue and Don have constructed their cosy two-story home and other buildings on the property out of straw bales and mud-brick. It was great chatting with them about the attributes of using these materials: low cost, quick to build, high level of insulation throughout the year, fire proof, versatile, environmentally sustainable and most importantly, aesthetically pleasing! Mike and I would love to build our own home this way one day, so we jumped at the opportunity while staying with Sue and Don to get some first-hand experience rendering a straw bale wall. I really enjoyed it – there’s nothing quite like playing with mud! And I was quite impressed by how well it stuck to the straw. Even though we didn’t have enough time to do the final layers, we were really pleased with the results – the natural finish and lovely ochre colouring.

Our hosts tread lightly on the earth in numerous other ways: they have on-site solar panels (backed-up by a generator) which provide all their electricity, rain and creek water, a veggie garden, a compost toilet which saves water and provides fertiliser for the garden, a bush shower which is heated by a wood fire, a reed bed to treat and recycle waste water… I could go on!

One of the ways in which Sue and Don make a living is their tipi-making business, under the name Gentle Earth Walking. I became very interested in North American First Nations cultures when I was in Canada so the idea of staying in a tipi really appealed to me. It’s much like camping except that you get to have a fire inside your tent which is great for warmth! Mike and I still have to learn the art of preventing the fire from smoking you out at the end of the night however! In Native American culture, when a tipi is erected special prayers are prayed to protect those within, and I have to say I did sleep well during those cold nights. 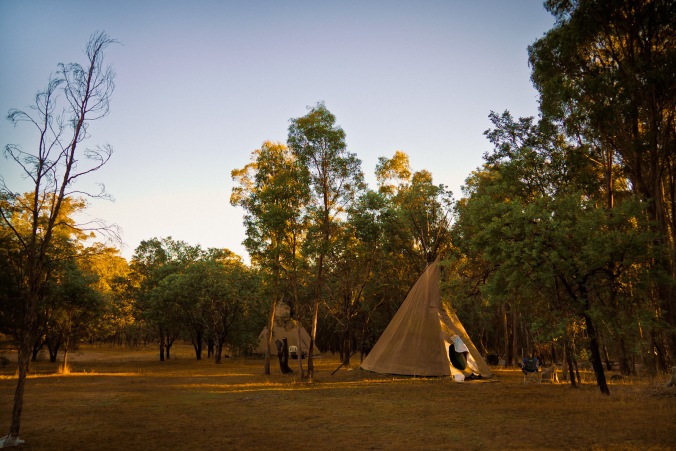 Our fantastic accommodation for the week!

It is evident that Sue and Don’s earthy spirituality has greatly contributed to their conscientious lifestyle, and during the course of the week we had many fascinating conversations surrounding their beliefs. Sue and Don have come to deeply appreciate the traditional beliefs and practices of both Native Americans and Indigenous Australians. I loved hearing about all their travels and experiences, and the way in which they have built relationships of mutual respect with elders and members from both cultures. I also appreciated the prayers they said at meal times, giving thanks to the Creator, Great Spirit and acknowledging the divine source of energy that lies within the earth, the rocks, the trees and the animals.

Our hosts earthy spirituality reminds me of Celtic spirituality. Interestingly, Don has Irish heritage, and although he barely touched on this, perhaps the Celtic approach to life and spirituality which is in his blood has influenced him more than he realises, or at least shared with us. I recently heard the following by John O’Donohue, the late Celtic poet and philosopher, “…for the Celtic people, nature wasn’t matter, but it was luminous and numinous presence which had depth and possibility and beauty within it.” I think this appreciation for creation is what’s sorely lacking, yet needed in our society today.

The end of another enriching day at Dja Willam

In all our conversations with Sue and Don, they expressed their beliefs with humility, graciousness and love. I felt safe to explore and open to possibility. And although we come from different spheres of faith (mine Christ-centred, theirs earth-based and indigenous), there is commonality amongst us. I came to really respect their beliefs which they live out with much integrity.

Don has had many interesting and challenging life experiences, including living in an intentional farm community and raising four boys, to becoming the only commercial timber benders in Australia (click here to see Mike’s brilliant short video on The Timber Benders). It was privilege to hear both Sue and Don’s stories, especially the hardships they’ve faced. I’m sure that’s what’s made them into the compassionate people they are today.

Don and his cheeky smile 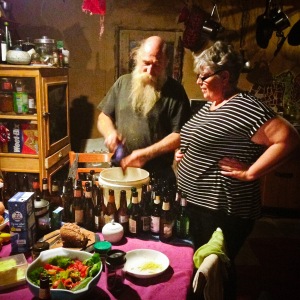 I felt particularly drawn to Don, but I can’t quite put my finger on it… maybe it was the way he reminded me of my own father at times – practical yet spiritual, maybe it was his encouraging style of teaching, maybe it was his quick and cheeky wit, or maybe it was that my spirit recognised in him a kindred spirit. He contained depth, inner peace and real joy.

Sue also had a lovely quality about her, expressed in her care for people and her interest in natural healing and medicine. I often heard her encouraging someone on the phone, or praying for the healing of individual family members and friends.

There is so much more I could share about this beautiful couple and their incredible warmth, friendship and hospitality, but suffice to say, they made our first WWOOFing experience one I will never forget. 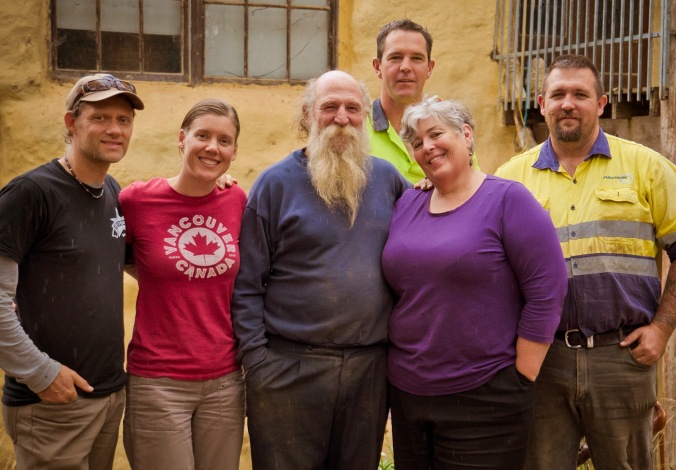 Mike and I, Don and Sue, and Don’s sons Tim and Jason who have been helping him with the timber bending

Read Mike’s blog to get a fuller picture of our time with Sue and Don – he’s shared some great things that I haven’t mentioned!